My 3rd great-grandparents, Benjamin Campbell and his first cousin (yes, it happens, and has occurred several times in my lines), Elizabeth “Betsy” Stoops, married in Highland County, Ohio, 11 March 1819.1

The Campbells, Stoops, and collateral families of Sharp (Robert Sharp and Grisela McCormick, Henry Sharp and Esther McCormick) and Spence (John Spence and Isabella McCormick) left Rockbridge County, Virginia, and arrived in Ohio between 1810 and 1820, settling in Adams, Clinton, Highland, and Ross Counties.  Descendants of these families moved to Clark, Fayette, Marion, Shelby, and Warren Counties.

In 1820, Benjamin and Elizabeth are living in West Union, Adams County, Ohio.2 By 1830, they have moved to Chester Township, Clinton County, Ohio.3

The 1840 census has Elizabeth listed as the head of the household living in Paint Township, Highland County.4

I have not found a death date (Ohio death records do not begin until 1867 although a few counties have them for 1856-1857) or burial location for Benjamin.

There is an 1878  death record for a Benjamin Campbell in Harveysburg, Warren County, Ohio,5 which lists his parents as Abram Campbell and Eliz. Stoops. I am not convinced that this is my 3rd great-grandfather.  I have not been able to locate him in the 1840-1870 censuses.  I need to do some newspaper research to see if there may be an obituary.

In 1850, Elizabeth is still living in Paint Township, Highland County, Ohio,6 and listed as 60 years of age. Living with her are daughter Anna Belle McCoy, son-in-law Edmund McCoy, granddaughter Elizabeth, and sons Daniel and John.

In 1860, Elizabeth is missing.  She is not in Highland County or other Ohio counties.  I don’t think she was too far away as she was close to 70 years of age and was probably missed in the enumeration. 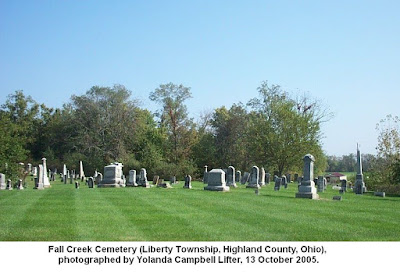