My dad was Allen Henry Campbell.  He was born 19 December 1928, in Springfield, Clark County, Ohio1, to Henry Clinton Campbell and Leona Myrtle Allen.  He was their 4th child and only son.

I don't remember visiting my dad's grave before we moved away to Georgia in 1973 and do not know if my mom ever did.  It wasn't until I visited it in 1995 that I noticed something was wrong.  It was a military stone and the information stated he served in World War II.  He would have been too young to serve in that war.  Sometime after I returned home, I ordered his military files from St. Louis.  His records stated he served in the Korean War.

I had thought about ordering a corrected marker, but I never did anything about it.

In April 2014 when I was visiting my brother, he gave me a flash drive and asked what I thought.  There were tombstone photos in the file.  I wasn't sure if he wanted me to research the names.  He said he wanted my opinion on the stones.  He said he was going to replace my dad's stone with a new one that would have the correct information on it.

The stone was ordered and we were not sure when it would be set as the cemetery office said it would be at least several months.  I was hoping it would be there by my October 2014 Ohio trip, but it was not.  A few months later the stone had arrived, but my dad's name had been misspelled so the process had to start again.

This morning I received an email from my brother with photos.  The stone is in place and it looks beautiful.  I am in tears and thankful for this gift my brother has given my father. A man who was not his biological father, but a man who became a part of his life when he was 10 years old. 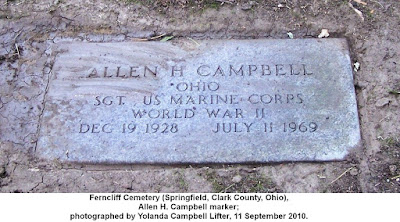 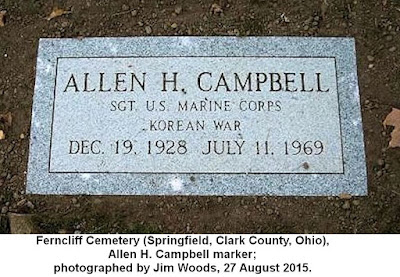