Today would have been my dad's 87th birthday. The last one we celebrated with him was in 1968.


Allen Henry Campbell was born 19 December 1928, in Springfield, Clark County, Ohio, to Henry Clinton and Leona Myrtle Allen Campbell. He was their 4th child and only son.


Dad was a great bowler and played in several leagues. His first job was as a pinsetter at Shamrock Lanes in Springfield when he was only 14 years of age.


I got my love of animals from him. His hobby was raising beagles and he had many over the years. I knew all of their names, every single one. He was a member of the American Kennel Club and was registered as Allen's Royal Beagles. Dad participated in many field trials throughout Ohio and bordering states. My sister Kelley and I used to attend them with him (my brother Jim also did before we were old enough to go). We even had our own corduroy jackets with Allen's Royal Beagles embroidered on them.


Happy birthday, Daddy! We love you and think of you often. 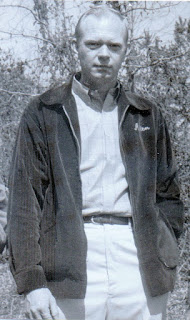 Posted by Yolanda Campbell Lifter at 8:10 AM