The ancestor I would most like to meet would be my paternal 4th great-grandfather Philip Stoops. He is the reason I began my one-name study of the Stoops surname and sparked my interest in New Castle County, Delaware.


According to his Revolutionary War pension file, Philip was born 20 August 1754, in New Castle County, Delaware. He married Elizabeth McCormick, the daughter of Samuel and Grisel [--?--] McCormick, on 9 April 1789, in Rockbridge County, Virginia. Philip died ca 1835 in Highland County, Ohio.


He is listed on the Pension Roll of 1835 as residing in Highland County, aged 80 years.


Philip is listed on a plaque at the Highland County Courthouse in Hillsboro, Ohio, as being buried in Highland County. I have not located a burial location for him. 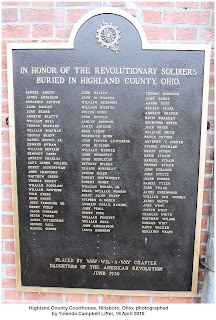 
Who were your parents and siblings? I have found several possibilities for his parents throughout the years, but I have not yet found any documentation. I need to devote some time to solving this challenge.


Was Elizabeth McCormick your first wife? Some researchers state he was married to a Spence first. I have not found a marriage record to confirm it.


What prompted your move to Rockbridge County, Virginia? Did other individuals move there with you?


What did you know about your in-laws? Was your father-in-law the Samuel McCormick who was from Cumberland County, Pennsylvania? What was the maiden name of your mother-in-law?


When you moved to Highland County, Ohio, in the early 1800s, what other families traveled with you? I know about your in-laws, the Campbell, Sharp, and Spence families.


I hope to find the answers to my questions in the near future.